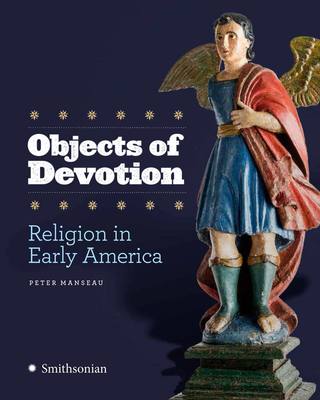 A companion volume to a 2017 Smithsonian National Museum of American History exhibition, Objects of Devotion: Religion in Early America tells the story of spiritual traditions in the United States through the material culture of diverse communities in the nation's colonial period and the early republic. The book explores the wide range of religions vying for adherents, acceptance, and a prominent place in the public square from the 1630s to the 1840s. The original thirteen states were home to approximately three thousand churches and more than a dozen Christian denominations, including Anglicans, Baptists, Catholics, Congregationalists, Lutherans, Methodists, Presbyterians, and Quakers. A variety of other faiths also could be found, including Judaism, Islam, traditional African practices, and Native American beliefs. As a result, America became known throughout the world as a place where, in theory if not always in practice, all are free to believe and worship as they choose.

A companion volume to a 2022 Smithsonian National Museum of American History exhibition, Discovery and Revelation explores the evolving relationship between religion, science, and technology through three centuries of Americans striving to understand the world and their place in it. With dozens of significant and rarely seen artifacts, including pamphlets from a 1721 smallpox epidemic, Benjamin Franklin's lightning rod, and a flight manual from Apollo 8, the book highlights the ways religious and scientific ideas have influenced each other and informed cultural change. With Andrew Ali Aghapour.